This Sony Cyber Shot RX100 II 20.2 Mp Digital Camera is in good overall condition and full working order with no faults, but with some cosmetic signs of use. This is a used item so there could be some marks to the paintwork on the body due to normal usage. All rubber grips and covers are present that might show some wear. The sensor is clear and free of scratches.

As is the case with quite a few advanced compacts, the Sony RX100 II doesn’t have a particularly large focal range. The zoom itself is a 3.6x optical zoom composed of Carl Zeiss optics, covering a focal range of 28-100mm in conventional 35mm terms. That’s neither long nor particularly wide by recent standards many top-end compacts have a mighty useful 24mm wide-angle.

The Sony Cyber Shot RX100 II 20.2 Mp was one of those rare products that caught the attention of casual photographers, enthusiasts and critics alike. It successfully fitted a large 1 type sensor into a compact camera an ordinary that without knowing otherwise, a casual observer would assume it to be a point and shoot like any other. Unassuming to the eye, it succeeded in pulling off an impressive trick delivering excellent image quality from a truly pocketable camera.

Sony has introduced Sony Cyber Shot RX100 II, sold as an associated model to the existing camera, back illuminated 20MP sensor (the largest BSI chip we’ve yet encountered), gives a claimed 40% improvement in low-light sensitivity, which Sony says will allow the Sony RX100 II to focus faster in low light than its predecessor, as well, of course, as producing cleaner high-ISO images.

The camera’s enthusiast appeal is encouraged by the addition of a Multi-Interface hot shoe, allowing use of external flashguns or, significantly, accessories such as an electronic viewfinder. The rear screen also now tilts up and down, which makes the Sony RX100 II more flexible to use and more at ease in bright light. Impressively, Sony achieved this while adding just 2mm to the camera’s complexity so it retains its pocketable ability. 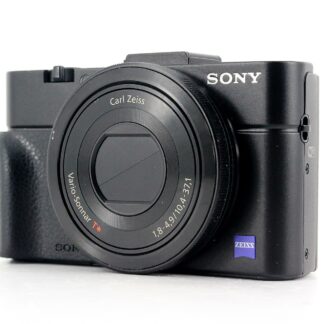